British Actor Simon Pegg Has Backtracked Over Comments Suggesting The Widespread Popularity Of Superhero Blockbusters And The Sci-fi Genre Is "Dumbing Down" Society After He Faced A Backlash From Fans Online. 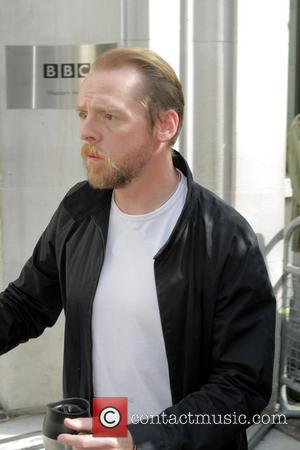 The self-confessed geek built his career on playing a sci-fi obsessed comic book writer in cult U.K. TV series Spaced and starring in alien films like 2011's Paul and 2013's The World's End, while he has since also become part of the Star Trek movies, portraying engineer Montgomery 'Scotty' Scott in the rebooted franchise.

However, he sparked controversy this week (begs18May15) when he expressed fears about society growing "infantile" due to a fixation on fictional characters and storylines.

He told Britain's Radio Times magazine, "Part of me looks at society as it is now and thinks we've been infantilised by our own taste. We're essentially all consuming very childish things - comic books, superheroes... Adults are watching this stuff and taking it seriously!

"It is a kind of dumbing down because it's taking our focus away from real-world issues. Films used to be about challenging, emotional journeys. Now we're really not thinking about anything, other than the fact that the Hulk just had a fight with a robot."

His remarks prompted a slew of negative criticism from fans, and now Pegg is attempting to clarify his comments in a blog post titled, "Big Mouth Strikes Again", in which he admits to making a mistake with such a "huge generalisation".

Taking to his blog on Tuesday (19May15), he writes, "Now, maybe I was being a little bit trollish, I can be a bit of a Contrary Mary in interviews sometimes.

"When you do lots of them, you get sick of your own opinions and start espousing other people's. Having said that, the idea of our prolonged youth is something I've been interested in for a very long time. It's essentially what Spaced was about, at least in part.

"The 'dumbing down' comment came off as a huge generalisation by an A-grade a**horn. I did not mean that science fiction or fantasy are dumb, far from it. How could I say that...?

"I love Science Fiction and fantasy and do not think it's all childish. I do not think it is all generated by dominant forces as a direct means of control...much. I am still a nerd and proud."