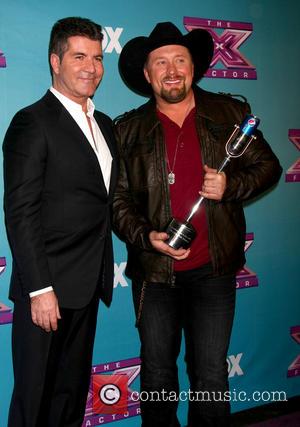 “She’s not my girlfriend, we’re people who date.” Those are the words that Simon Cowell used when he was quizzed about his relationship with the former Playboy model Carmen Electra. The clarification over their status came during an interview on Ryan Seacrest’s radio show on Wednesday morning (December 19, 2012), New York Daily News reports. Simon might not want to call Carmen his girlfriend just yet but he did go so far as to say “she’s adorable, isn’t she?”

Simon’s not the only prone to a bit of public gushing either; Carmen recently told Access Hollywood how much she liked the x factor judge. “He's so cute. He is adorable. He's actually a sweetheart,” she said back in November. “The thing is, we worked together on Britain's Got Talent. I was a guest judge and I had so much fun. I really liked him. I think he's really cool… Now, obviously, he's in [Los Angeles] with ‘X-Factor’ and we started to hang out and we became friends ... I think he's a great guy.”

Both Cowell and Electra have ended long engagements this year; Carmen was engaged to guitarist Robert Patterson for four years and Simon had been engaged to the makeup artist Mezghan Hussainy for two years. However, just because they’ve both walked away from commitments they’ve made to other people, doesn’t mean they’re ready to make one to each other. For a start, Simon seems keen not to label Carmen as his girlfriend and on top of that, e was spied earlier this month at a restaurant with the actress Janina Gavankar.