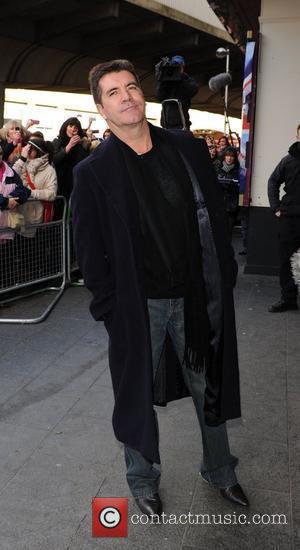 Picture: Simon Cowell The judges arrive for the 'Britains Got Talent' auditions at the Apollo Theatre. London, England - 09.02.10

Simon Cowell's all-star remake of R.E.M. song EVERYBODY HURTS has stormed to the top of the U.K. singles chart, making it the fastest-selling charity single this century.
The music mogul called on artists including Mariah Carey, Miley Cyrus, Leona Lewis and Kylie Minogue to feature on the cover track to raise money for Haiti's earthquake relief efforts.
More than 453,000 copies of Everybody Hurts have been sold since its release last Sunday (07Feb10) to take it to number one and make history with the biggest first week sales of any charity song since 2000.
R.E.M. have agreed to waive royalty fees, while all proceeds are being split between the Disasters Emergency Committee (DEC) and British newspaper The Sun's Helping Haiti campaign.
Meanwhile, Owl City's Fireflies slips down from one to two, and Timbaland's duet with Katy Perry, If We Ever Meet Again, takes third place.
In the U.K. albums chart, Alicia Keys holds strong with The Element of Freedom, while Andre Rieu's Forever Vienna and Paolo Nutini's Sunny Side Up sit at two and three respectively.
Soul legend Sade makes her chart comeback with Soldier of Love entering at four, and Massive Attack debuts at six with Heligoland.