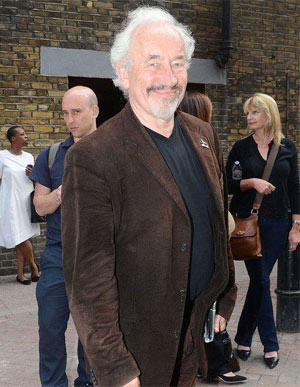 Acclaimed actor, writer and theatre director Simon Callow, CBE, will receive The Stage Award for Outstanding Contribution to British Theatre at the ceremony for the 2013 UK Theatre Awards on Sunday 20 October at London's historic Guildhall.

Born in London in 1949, Simon Callow trained at the Drama Centre and made his professional stage debut at the Edinburgh Festival in 1973. His long and varied career has seen him appear extensively with the Royal Shakespeare Company, the National Theatre, at the Royal Court, in the West End and in productions all over UK. He is about to embark on a nationwide tour of Chin-Chin with Felicity Kendal.

He has performed in a number of one-man plays including The Importance of Being Oscar, The Mystery of Charles Dickens,Being Shakespeare, and earlier this year, Inside Wagner's Head at the Royal Opera House's Linbury Studio and The Man Jesus at the Lyric Belfast. His one-man version of Charles Dickens' A Christmas Carol was also a festive hit at the Arts Theatre in 2012.

He has directed over thirty productions, including Carmen Jones, the West End and Broadway productions of Shirley Valentine and Single Spies at the National Theatre, as well many operas, most recently The Magic Flute at Holland Park in 2008.

Rachel Tackley, President of the Theatrical Management Association (TMA), said: "I am delighted that the TMA has recognised the prolific work of Simon, who has had a vital and lasting influence on theatre stages all over the country and been a great ambassador for British Theatre during a long and illustrious career."

The UK Theatre Awards are the only nationwide awards to honour creative excellence and the outstanding achievement seen on and off stage throughout England, Scotland, Wales and Northern Ireland.

The Awards will be presented at a lunchtime ceremony on Sunday 20 October at London's historic Guildhall, a magnificent medieval Grade 1 listed landmark building situated in the City of London. Musical theatre starMichael Xavier will act as compSre for the event, which will include performances from Janie Dee and Frances Ruffelle, and appearances from guest presenters Louise Dearman, Shaun Escoffery, Paul Michael Glaser,Katherine Kingsley, Maureen Lipman, Hattie Morahan, Ben Richards and Ed Watson amongst others.

As well as established awards for both performance and management achievement decided by expert panels, this year any professional theatre was eligible to enter for the My Theatre Matters! UK's Most Welcoming Theatre Award in association with Classic FM voted for by the public for the first time.

The UK Theatre Awards continue to be sponsored by a number of major organisations involved in theatre across the UK - The Stage, Harbottle & Lewis, John Good, Theatre Tokens and White Light -  and for the first time, Global Radio's national classical music station Classic FM.