By Andrew Lockwood in Music Reviews on 03 June 2010

An ex-post-rock bassist and nu-folk maudlin ballad lover of Homefires festival infamy paired with a micro-indie label founder, who were both initially happy basking in the glow of anonymity, reveal a shared desire to produce 'Interesting music with a bit of depth that you respond to immediately but can listen to 10 times and get more out of.' Don't be put off by the pair having seemingly consulted with Lady Ga Ga's milliner on their choice of telephonic headgear either, it's the music that'll win you over.

Silver Columns are Adem Ilhan and Johnny 'Pictish Trail' Lynch. Both Adem and Johnny have released albums under their own monikers as well as having numerous production and collaborative credits. Under combined steam they are set to play as many festivals as they can muster this summer so it is more than likely that you may encounter their take on a more considered electronic pop, that is, according to Adem, both 'uplifting and melodic'. 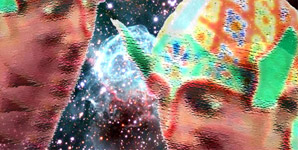