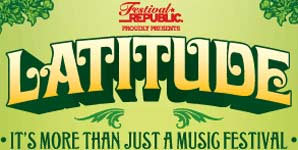 For a festival that only opened its doors to the public for the very first time in the summer of 2006, Latitude has swiftly usurped pretty much all of its main rivals to become THE UK music lover's best outdoor festival.

While the inaugural line-up now reads like a list of assailants wanted for crimes against music (Paolo Nutini, Antony & The Johnsons and Snow Patrol to name but three), last year's bill took the bull by the horns and made the rest of the competition sit up and take notice. Both The Arcade Fire and The Good The Bad And The Queen wowed festival goers with exclusive sets, while the likes of Jarvis Cocker, The Rapture and Friendly Fires further established Latitude's eclectic music policy coupled with a more customer friendly vibe than any of its money-orientated peers could ever dream of.

You see, Latitude isn't just about the music; there's a comedy tent, theatrical productions, poetry and literature readings, art galleries, film shows that make this one of the most unique events on the calendar as well. Situated in the Norfolk countryside setting of Henham Park, its picturesque setting makes for a more pleasant atmosphere than the inner suburbs of Leeds and Reading or the mud-sodden farmlands of rural Somerset, and so far, touch wood, the weather has been kind too.

This years forcast predicts a fairly hot and dry weekend too, so hopefully the wellies and bin liners can stay tucked away at the bottom of the rucksack for another year at least.

Now the bad news; Latitude has completely sold out for 2008 - indeed it was the first UK festival this year to sell all its weekend tickets in advance - so if you haven't already got a ticket, too bad I guess! However, Contactmusic will be there for the whole weekend and bringing you exclusive reviews and interviews from the site in the coming week.

In the meantime, here's ten artists and performers we don't think anyone at Henham Park this year would want to miss.

Kyte (Friday 18th July - Lake Stage - 12:30-13:00)
Normally, the first band of the day are put in the graveyard slot for a reason; background music for those just arriving and finding their way around the site. This year however, we advise you to make an extra special effort to navigate your way to the Lake Stage as this Leicester-based five-piece, Kyte, are one of the most ambitious musical forces in the country at the moment. Did we mention shoegazing? Only of a high maintenance, brightly shined variety.

Murder By Death (Friday 18th July - Obelisk Arena - 14:40-15:10)
Who said that whiskey-sodden blues regaling stories of deceit, mistrust and guilt couldn't provide an uplifting jolt in the middle of the afternoon? Not us that's for sure, as we can't wait for Indiana's finest country-rocking miserablists to both lift and help us down spirits in equal measure.

Howling Bells (Friday 18th July - 18:25-19:05)
Aussie rockers Howling Bells play Latitude for the second consecutive year, except this time their elevation towards the top end of the bill is due to both last year's stunning performance and a hive of anticipation surrounding the expected release later this year of their long overdue second album. I don't know about you but we're buzzing already.

Bill Bailey (Saturday 19th July - Comedy Arena - 15:00-15:45)
"The funniest comedian I've ever seen" says my girlfriend's sister's hubby, and who am I to argue with a future bro-in-law, eh? With fellow 'Never Mind The Buzzcocks' captain Phill Jupitus also set to appear at Latitude this weekend, what's the betting on a little pop quiz tomfoolery taking place this weekend?

Mark Thomas (Saturday 19th July - Literary Arena - 19:45-20:45)
There's nothing like a good debate over a pint or two on a Saturday night, so expect a healthy row with added humour and maybe the odd plug too for his latest novel from this decade's answer to - in a less annoying sense - Ben Elton.

Sigur Ros (Saturday 19th July - Obelisk Arena - 21:30-23:00)
Opportunities to see the seminal Icelandic quartet that is Sigur Ros are becoming all too rare these days, particularly here in blighty, so make the most of these 90 minutes in the presence of Jonsi Birgisson and co., where adjectives such as "ethereal", "sky scraping" and "utterly precocious" will no doubt be the order of the day.

Attila The Stockbroker (Saturday 19th July - Poetry Arena - Time TBC)
Having lived through the dark days of Labour's last dalliance with power in the late 1970s not to mention Thatcher's reign over the next decade or so - and survived both - punk poet Attila The Stockbroker's scurrilous rhymes and class-baiting tales ('Nigel Wants To Go To C&As' anyone?) will make you reel in shock and roar with laughter, often coinciding with one another. One of the last true bastions of the first era of punk rock - definitely not to be missed.

The School (Sunday 20th July - Lake Stage - 14:00-14:30)
Did we mention the word "twee"? Maybe once, but don't let that put you off, as Cardiff's finest purveyors of pure, lo-fi, good time pop could just be this year's undiscovered gems. Make sure you check them out. You won't be disappointed, we promise.

Lovvers (Sunday 20th July - Lake Stage - 18:45-19:15)
By Sunday evening with energy levels at an all-time low, Nottingham's noise punk quartet Lovvers should be just the shot of adrenaline you'd need for that long journey home the following morning. Failing that, you could always try and entice singer Shaun Hencher into the pit for a little off-stage audience participation. Unmissable.

Blondie (Sunday 20th July - Uncut Arena - 20:30-21:15)
With more hit singles to their name than just about every other artist on the bill put together, Debbie Harry and Blondie are one of those acts who mix both nostalgia with a timeless pop sensibility that still manages to sound fresh over thirty years on from their formation. Time to blast out those vocal chords y'all one last time.

Of course there are so, so many more artists we're literally busting a gut to go and see; in fact, with a line-up this exceptional, time clashes between stages are almost inevitable. For more information on who's playing and when visit the official Latitude website.