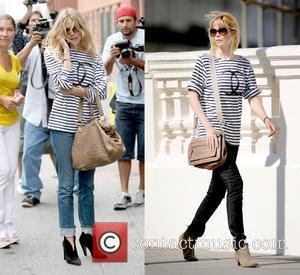 Sienna Miller had to apologise to the casting directors of her upcoming Broadway play AFTER MISS JULIE, because she congratulated her actor pal Jonny Lee Miller on his role before the announcement was made official.
The Factory Girl star will tread the boards of the New York City stage this September (09) in an updated version of the Strindberg classic, and she was invited by casting boss Jim Carnahan to sit in on the auditioning process to find her a leading man.
Miller admits she hated scrutinising other actors' performances, telling Vogue magazine, "I wanted to be in Camp Actor, not Camp Decision!"
Once a decision was made, she wasted no time in contacting Lee Miller, who eventually landed the role - but she soon realised she'd broken the news too soon.
She adds, "He's the nicest guy. When I found out, I texted him thinking that he knew, but he obviously hadn't heard yet. It was very unsubtle."