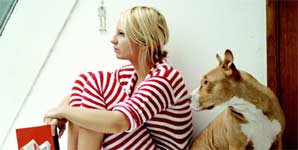 Lady Croissant, recorded live at Bowery Ballroom in NYC, has been confirmed for US release on 3rd April and UK release on 7th May 2007 (Astralwerks). The release dates in other territories are to be confirmed.

Included are songs from both the Sia and Zero 7 catalogues. This live performance captures Sia at an incredible height, performing such songs as 'Numb', 'Breathe Me', as well as a cover of The Pretenders song, 'I Go To Sleep'.

Sia is currently back in the studio recording her next solo album in LA. Expect an autumn release in the UK along with a series of live shows. 2007 is shaping up to be another exciting one for Sia. Over 5 million MySpace plays are just an indication of the ever growing buzz surrounding one of the most innovative and interesting female solo artists of our time.