Review of Some People Have Real Problems Album by Sia 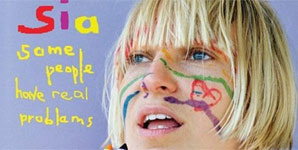 Australian Sia Furler is best known for her work with chill out collective Zero 7, but has also held the reigns of a modest solo career without ever seriously looking like troubling the heavyweights. Her star turn on the blunted post millennial classic Destiny appeared to usher in a new folk tinged back to mine aesthetic, but whilst fellow Sevener Sophie Barker's 2006 debut Earthbound was a mostly acoustic suite of confessional self doubt, her compatriot has chosen to steer an unadventurous course through country tinged soul. Fuller's main asset, her voice - a bluesy honk reminiscent of the Cocteau Twins Liz Fraser - is also her Achilles heel, for whilst there's ample evidence of its versatility, there's also a cavalcade of overwrought syllable mangling which at times necessitates access to a translator. Her third album,

Some People Have Real Problems showcases decisions suffering from atrophy, never better demonstrated here than by a timid choice of cover version - The Pretenders I Go To Sleep, sounding even drowsier than the original - and a glut of saccharine ballads as pedestrian as they're uninventive. It does have it's moments; the up-tempo stomp of The Girl You Lost To Cocaine provides a sassy morality fable, Academia is as lyrically bonkers as anything from Roisin Murphy's hyper extended lexicon and the climax of Electric Bird, with it's Bond theme brass filler is a mildly diverting pastiche, but elsewhere moments of inspiration are hard to find. Look on the bright side though; at least the mother's day present problem is solved.