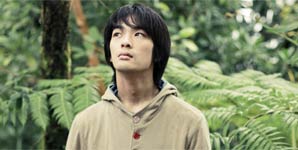 A few weeks ago whilst clearing out old mementos I found a sketch from my primary school days. It was a crude drawing of a band playing on stage, for the most part typical in regards to set up but at certain points it drifted into infantile trail-offs; colours appeared from nowhere, random toys cluttered the stage, and upon closer inspection the ban members seemed to station at different heights, some floating several feet of the ground whilst others crouched on the floor, limbs splayed awkwardly at angles both acute and obtuse. Tokyo Japan's Shugo Tokumaru and his band bear this image fruit.

There is a complete child-like quality to his/their music too; the intricacies and discoveries of Shugo's guitar-playing, spinning hyperactive riffs into almost bubble-gum pop structures. 'Parachute' and 'Rum Hee' are kaleidoscopic wonders, hazy sixties hooks fed into the mouths of make-believe monsters and drawn over in felt tip.

Much further than on record Shugo's music is driven almost completely by percussion live. For the most part his four -piece backing band play a staggering amount and variety of percussive instruments, and when this is not enough Shugo himself often claps along or taps the body of his guitar. When the rhythm of the quartet is sufficient they can be found hitting toms and cymbals, whether full size or tiny replicas, tapping xylophones, triangles and glockenspiels, shaking maracas and bells and winding up toy ducks up towards a microphone.

It all adds to the shy naivety, yet breathtakingly ambitious and creative of Shugo's music. When he plays a cover of 'Video Killed The Radio Star' mid-set, reading syllable by syllable from a lyric sheet, everything falls perfectly in place and there is a surge of euphoria and bright-eyed wonder that has almost completely disappeared from music. Everyone in the crowd looks at each other in joy and astonishment, basking in the technicolour glow of musical perfection, the way people might have done ten years ago before Neutral Milk Hotel wrapped things up or twenty-odd years prior to that when Michael Jackson first entered the world of solo performance. That less than a hundred people experience such genius is damn-near criminal, but a couple decades from now its almost certain that every audience member will look back with the same reverence. Utterly fantastic. 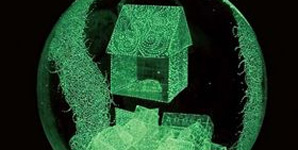