Following their recent performance at the Coachella Festival, NME praised Shout Out Louds as "the best new band of the weekend" describing them as "four sensitive boys and one ice-cute bombshell who sound like The Strokes, Belle & Sebastian and Bright Eyes rolled into one super-lush folk-pop sandwich”, whilst Dazed & Confused declared that Shout Out Louds are “another sure sign that Scandinavia knows how to rock”.

'The Comeback', follows debut single 'Very Loud' which was released in June, drawing comparisons to The Flaming Lips and Arcade Fire and at the same time the band were in the UK to play a handful of intimate club shows alongside a couple of prestigious shows supporting The Magic Numbers (more of which later).

Having recently toured the U.S. with The Dears and The Futureheads, Shout Out Louds are currently back out there opening up for Kings Of Leon and Secret Machines, and return to the UK later this month for three more shows supporting The Magic Numbers. Expect details of a headline tour in September to follow soon.

‘The Comeback’ is released on two 7”’s and a CD. The first 7” includes the kooky, bossa nova-esque remix of ‘The Comeback’ by Ratatat and exclusive new songs ‘My Friend And The Ink On His Finger’ and ‘Never Ever’ appear on the second 7” and CD.

Shout Out Louds - The Comeback... 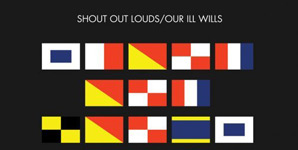 Shout Out Louds - Our Ill Wills