It turns out that LaBeouf's questionable behavior of late has all (or mostly) been leading up to this.

Is Shia LaBeouf a misunderstood genius of our time? The actor went from cryptic tweets to deliberate plagiarism, to storming out of a press conference and wearing a paper bag on his head and finally, to a performance art piece. LaBeouf brought out the “I Am Not Famous Anymore” paper bag for a performance art piece, which will run Tuesday through Sunday at the Cohen gallery in Los Angeles. The piece is called “#IAMSORRY” and it was announced via press release from the gallery.

“Shia LaBeouf is sorry. Sincerely sorry. He will be in situ at 7354 Beverly Boulevard for the duration. Implements will be provided. Free admission,” the announcement said. 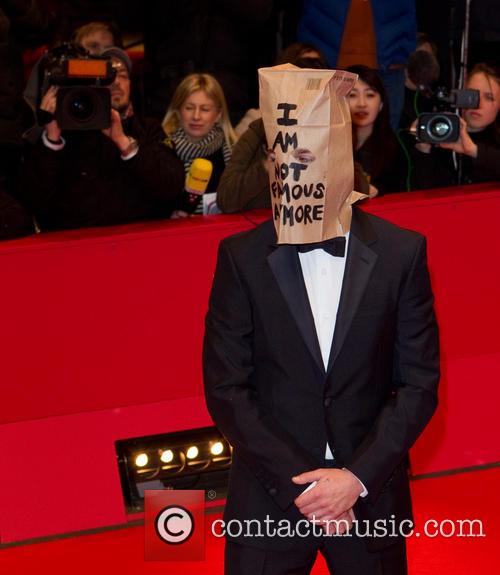 It was all part of a bigger picture.

Are you beginning to see a pattern here? If you’re planning to visit and see the exhibition for yourself, you might want to skip the spoilers ahead. Upon entering the exhibition, visitors were greeted one at a time by a woman standing behind a table with 'implements' apparently related to Shia's life, Vulture’s review says. These included a bullwhip (presumably related to Indiana Jones and the Crystal Skull), a bowl of Hershey kisses, a pink ukulele, some Transformers toys, a bottle of Jack Daniels (how very Ke$ha of him) and a pair of pliers, among other things. Way to set up the vaguely creepy ambiance.

LaBeouf has been tweeting the same phrase every day since January 13.

I AM NOT FAMOUS ANYMORE

Visitors were then encouraged to pick up an item from the table and continue onward through a curtain to the next room, where LaBeouf was sitting in the now familiar tuxedo-and-paper-bag ensemble. From then on, most visitors report different reactions. One TMZ cameraman, who picked the bottle of whiskey, asked LaBeouf to take off the “distracting” paper bag, to which the actor obliged. The Vulture writer recounts asking LaBeouf a series of questions, while 'absently strumming the ukulele while we stare at each other.'

"As I flick those strings, the sound of the ukulele so pretty that it belies my total inexperience with it, I notice that Shia's big brown eyes have grown watery," the article said.

“I sat down. I read messages mostly negative, some positive, declaring LaBeouf either a “baby,” an “idiot,” or a “genius.”” A writer for TIME magazine recalls. “Things about having to “move on,” or suggestions of “death.” They felt like tweets; they probably were tweets.”

The piece is an exploration of the more regrettable aspects of fame. There are five days left for members the public to walk in and get as close as they like to Shia LaBeouf and decide for themselves whether it counts as a success. Even if the installation fails to move every single attendee, however, LaBeouf deserves praise for his remarkably clever promotional stunts.

Today the message was replaced with: