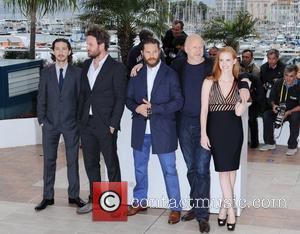 Shia LaBeouf has become the latest celeb to get his kit off all in the name of art and working with bands who believe that nudity is the way to go in realising their concept. Erykah Badu has of course been making plenty of noise about a very much Nsfw video made by Wayne Coyle and The Flaming Lips after she (she later revealed her sister took part in the shoot too) was shown in a bath covered in what looked like blood, and now LaBeouf has allowed Icelandic nature documentary-sound-tracking types Sigur Ros to do what they will with his image.
In fact, it's filmmaker Alma Har'el who's portrayed him a slightly softer life than the 'Lips odd portrayal of Badu, showing the Hollywood actor - completely naked of course - wrestling a woman in bed, cutting back to the same room at the end to catch them writhing in ecstasy before he carves a tattoo in her back. As you do.
Unsurprisingly, his female fans on Twitter are rather enjoying the clip, with one writing "Just saw Shia LaBeouf naked in a music vid!!! Wtf!!! Wow he is really....wow!!" However many have refused to accept that this is clearly an attempt for the actor to move on from his childhood 'Even Stevens' days, one commenting "Shia LaBeouf can do full-frontals and be part of artsy videos and be a hobo but he will always be Louis Stevens in Even Stevens for me."