The actor had to be muzzled by police to stop him spitting. 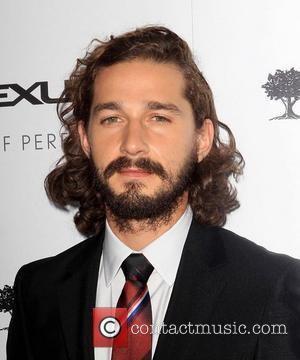 A dishevelled Shia LaBeouf was seen leaving a Midtown NYC court on Friday morning (27th June) after having been arrested for his persistently disruptive behaviour during a theatre performance the night before. The 28 year-old actor was charged with criminal trespass, harassment and disorderly conduct and taken into custody after causing a disturbance during the Studio 54 Cabaret performance.

The actor was spotted carrying out a string of inconsiderate actions, such as smoking in the theatre, refusing to stop, and swearing loudly. LaBeouf was escorted out of the premises by police after refusing to leave when asked to do so by security guards, confirmed NYPD spokesman George Tsourovakas

"He was being rather difficult and combative, verbally...to the point where security guards asked him to please leave the premises and he refused," Tsourovakas said, via CBS. "Police were called and he was detained and arrested."

Witnesses also reported seeing the filmstar chasing a homeless man trying to take either his baseball cap or McDonalds meal before stumbling into the theatre's bar and feeding a woman a strawberry from her own meal.

It is believed that Shia had been drinking heavily on Thursday afternoon whilst he watched South Korea take on Belgium in the World Cup. A bartender at the Midtown bar, Bar Iguana, told TMZ that the actor was polite, tipped well, and professed to be feeling patriotic because his family is Belgian. Shia Shamed: The Actor Was Arrested For His Unruly Behaviour During A Theatre Performance [Credit: Getty Images].

Hours later, Shia was, by all accounts, raising hell during the first act of Cabaret before being arrested at approximately 9:30. The troubled actor was reportedly led away in tears by six police officers.

LaBeouf allegedly screamed at the arresting officer: "F*** you... this is f****** b******t... Do you know my life?" before adding "Do you know who the f*** I am?" according to The Smoking Gun. He was taken to the Midtown North precinct where his angry tirade continued. The 'Even Stevens' Star Reportedly Had To Be Muzzled By Police To Stop Him Spitting.

He allegedly told one cop: "I have millions and millions of dollars and attorneys...I'm going to ruin your career" before calling another a "f*g." Shia was muzzled by the police after he refused to stop splitting, reports the NY Post.

After being arrested, he was processed and released from a holding cell on Friday morning, an NYPD spokesman told MailOnline.

LaBeouf was sighted earlier today leaving the courthouse with a ripped T-shirt, his shoelaces in hand and a piece of paper. He headed straight to his hotel and refused to stop to answer any questions. He hasn't issued a public statement regarding the incident.