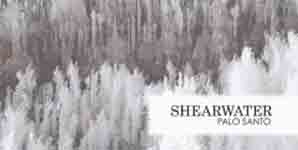 Palo Santo lies somewhere between folk and slow-tempo rock…it's a recipe of breathtaking vocals, painful lyrics, rich instrumentation, slick arrangements, haunting melodies and beautiful textures… all of the elements pull together to construct dreamy soundscapes and provoke the most frosty & heartfelt of emotions.

Jonathan's voice turns many corners, often unexpectedly, sometimes softly reassuring & comforting, sometimes aggressive and disconcerting, His voice travels through varied tones making his compositions so eventful and so very intriguing. Comparisons have been made with the legendary, and incredibly gifted Jeff & Tim Buckley, although it would be unfair to suggest that Jonathan is superior or even on par, those comparisons do seem to be warranted to a certain degree. Meiburg holds a fine vocal range and is more than effective with falsetto style vocals. The level of emotion and the ability to change the approach to his lyrics through vocal presence are among the other similarities he unquestionably shares with the renowned father & son.

Although their is a high level of consistency throughout this record with each track as engaging as the next, it does have its highlights, opening track; "Dame et La Licorne" with its melancholic piano riff and industrial-like soundscape, "White Waves" with its classic fuzzy guitar riff, "Nobody" with its breathtakingly emotive vocal melody and "Jonny Viola" with its sweet falsetto vocals, but the most outstanding track on the record is the spine-chilling "Hail Mary" the lyrics so painfully beautiful, Meiburg's moving vocals explore all depths, tension swells and the song fittingly ends in a crescendo of intense noise.

Shearwater's new course is a welcome direction that reaps breathtaking results. Jonathan Meiburg is a man who wears his heart on his sleeve, his powerful vocals & moving songwriting is a joy to behold. Shearwater's ability to engage the listener in such a vivid way is hugely admirable. Palo Santo is a truly fantastic record that is likely to go unnoticed by many. Seek it out…you will not be disappointed.

Shearwater - You As You Were Video