Review of The Golden Archipelago Album by Shearwater 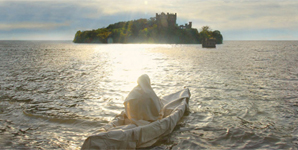 It is hard to believe that Shearwater are set to release their sixth studio album, but the thing that is more surprising is how can one band be labelled under so many genres of music? Since the release of their first album Shearwater have been tagged as Indie, Indie Rock, Psych folk, and folk rock.

Shearwater have labelled 'The Golden Archipelago' as their best album to date. As soon as you start to get into this album you notice two things immediately, firstly, this is a massive self indulgent album and secondly, how the hell do three people make so much noise and different sounds.

The first track 'Meridian' starts the whole album off with a tranquil feel to it and Jonathon Meiburg's vocal sound purposely fragile. You sense that you are there by the sea and you can actually feel a breeze on the back of your neck.

'Black Eyes' is a massive turn around against the opener with Meiberg's vocals now sounding more preacher-esque, it seems like the music is being reborn and living bouncing off every word spoken. Then we are hit with a fast short number in the shape of 'Corridors' which is a song that is short and yet sounds so complex. It leaves you confused on what is going to happen next and what is actually going on. 'Corridors' explained in short is a brilliant burst of life.

We are then slowly brought down to earth with 'God Made Me' a nice mellow chilled out number, especially after the excitement from 'Corridors' The album comes to a close with 'Missing Islands' which is like watching the sun set, a peaceful mellow end.

A truly brilliant album. In the world of reality this is never going to sell millions of records and yet it's albums like this that deserve great accolade and the sales to go with it. Shearwater have gone out and made an album that they are happy with, they haven't worried about what the general 'Joe Public' think

Shearwater - You As You Were Video