The history books are littered with bands naming themselves after songs. Shakespears Sister, Deacon Blue, The Ordinary Boys and Jet probably sit on the wrong side of the fence for those trying to put forward a case why it's a good idea. Radiohead, The Sisters Of Mercy, Ladytron and Blonde Redhead on the other hand stand out as shining examples of why such homage need not necessarily amount to plagiarism or just a complete lack of nous. Glasgow collective - and judging by the number of intermittent members and guests collective is a more apt descriptor than band - She's Hit fall succinctly into the latter camp if 'Pleasure', their first long player is anything to go by. 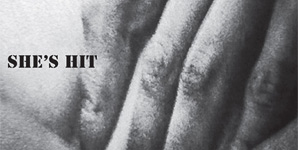 While choosing a moniker that ties in with one of the standout moments off The Birthday Party's 'Junkyard' LP inevitably draws comparisons with all things Nick Cave, the contents of 'Pleasure' couldn't be further from such expectations, for the most part anyway. Sure, vocalist David Wilson employs a similar deathly drawl to the one Cave or Bauhaus' Peter Murphy trademarked as their own way back when, none more so than on the opening title track itself. "Can't feel no lust, can't feel no pain" intones Wilson over a sombre funeral march that threatens to descend into Goth parody. However, don't be deceived by such a flaccid introduction as anyone that turns off now is completely missing the point.

Because the rest of 'Pleasure' quite simply oozes a demonic fury and seismic depth sadly lacking in most homegrown bands at present. From the outset it's quite clear that She's Hit have no interest in radio playlists, television channels or any kind of media induced popularity contest. Instead they've thrown their various influences together in one acerbic melting pot and come up with a record that challenges, even confounds the listener on every level.

Current single 'Shimmer Shimmer' could be garage standard 'Have Love Will Travel' interpreted by The Fall. Throw in an extra level of reverb-addled guitars and disproportionately ferocious drums and a whole new realm of exaltation quickly emerges. 'Young Love Dead' meanwhile rescues Phil Spector from his prison cell in California and jettisons him via a time machine to East Kilbride circa 1984, such is its kinship with all things Mary Chain in their fuzziest heyday. Heavier still is the atomic 'Re:Peater', where effigies of A Place To Bury Strangers and The Soft Moon spring to mind, channelling noise propensities with discordant beats.

Where 'Pleasure' really takes off in a dimension of its own is on the cooing 'Lustless', luscious boy-girl harmonies evoking memories of The Raveonettes at their finest while playfully mesmeric guitars intertwine in the foreground.

Sure, there will be criticisms that She's Hit maybe sail a little close to the wind at times when referencing their influences, but overall, 'Pleasure' is a distinguished and totally unexpected first outing for an unsigned band from Glasgow, especially in the current climate.