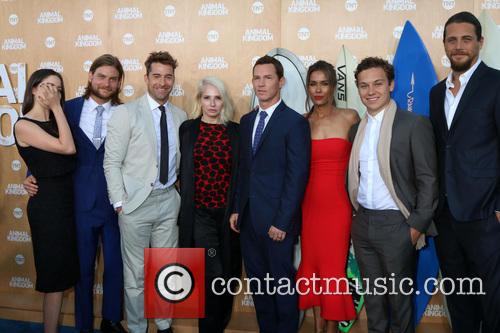 By Bradley Null
Very Good
Finally. We always knew Robert Rodriguez had talent as a filmmaker. We were just waiting for someone to put a good script in his hands, and Kevin Williamson has done that here. Do not be fooled by the woefully bad trailers, or by the fact that critics have roundly panned this horror film. The Faculty is easily the best of the genre to come along since Williamson's breakout hit, Scream. It is also the first watchable film Rodriguez has put up since storming onto the scene with El Mariachi.

Easily the biggest problem with this movie is in the marketing. I can only imagine how pissed off Williamson, Rodriguez, and everyone else involved in the movie must have been to see the film marketed as just another schlocky entry into the horror genre, which generally takes the words aliens; teenagers; battle; suspicious; killer; small town; etc. and jumble them up to come up with a concept (to wit, this time: suspicious small town teenagers battle killer aliens). Now if you are already a big 80s horror fan, just skip this review, because you already saw the movie, but this review is for people who are highly suspicious of shelling out eight bucks to see a horror flick. The only reason I actually saw The Faculty was because my little sister begged me to. But now I'm trying to convince you to.

By Frank Ochieng
Excellent
Irish filmmaking has always resonated with an urgent sense of political forethought. Filmmaker Jim Sheridan diligently championed the determined spirit of tortured protagonists in gutsy pictures such as My Left Foot, The Boxer, and In the Name of the Father. In the uplifting Emerald Isle melodrama Borstal Boy, Jim's brother Peter Sheridan effectively explores the trials and tribulations of a 16-year old boy's exploits behind the unbearable confines of a British World War II borstal, a reformatory center for boys, based on charismatic Irish writer Brendan Behan's memoir. Provocative and resoundingly crafty, Borstal Boy is a solid and refined piece of moviemaking imbued with passion and attitude.

Thanks to his heavy involvement in IRA-related activities, the film opens with Brendan (Shawn Hatosy, Anywhere But Here, John Q) in jail in East Anglia, England. Among the prison-camp personalities that the overwhelmed Brendan encounters are a thieving gay sailor named Millwall (Danny Dyer), whom he eventually. He also finds a love interest in the lovely and supportive Liz (Eva Birthistle), who happens to be the daughter of the facility's presiding Governor (Michael York). Consequently, Brendan begins to shape his outlook on life, challenging what was once a rigid belief system entrenched in his conservative shell.

Jason Lee is usually the funniest guy in any Kevin Smith movie (Banky in "Chasing Amy," Azrael in "Dogma"). Julia Stiles has had fine comedic timing ever since her big splash in "10 Things I Hate About You." But they couldn't be more mismatched as romantic leads in "A Guy Thing."

A cold-feet comedy of accumulative misunderstandings about a groom-to-be who wakes up with a blonde in his bed the morning after his bachelor party -- and assumes the worst -- the movie spends most of its time mining very familiar territory. Lee hides the girl's forgotten panties, discovers she's his fiancée's cousin, and has generic nightmare run-ins with his future in-law and Stiles' ex-boyfriend.

Most of its jokes come from the compounding lies that make it hard to sympathize with the hero, and the moment you meet each one-trait character, you can see his or her entire story arc mapped out in front of you. Example: Stifled Lee, who's going to veer from his buttoned-up, conservative bride-to-be (Selma Blair) and fall in love with wild-child Stiles, has a buttoned-up, conservative brother (Thomas Lennon) who is secretly in love with Blair. Hmmm...I can't imagine where that's going.

Adapted from Sam Shepard's play about betrayal, blackmail, and a horse racing scam that haunts its conspirators for 20 years, "Simpatico" gets by for a while on a cast full of tense, brutal, benumbed performances.

Nick Nolte stars as Vinnie, a haunted, hard-drinking and fraudulent private eye who has lived a near-destitute existence in Los Angeles for two decades on hush money extorted from a former friend named Carter (Jeff Bridges), his partner in a pony-fixing during their younger days.

As the film opens, Vinnie sets in motion a chain of events designed to see him trade places with Carter, now a rich Kentucky breeder. He plans not only on usurping the wealth his ex-buddy has amassed since their friendship disintegrated, but also on recapturing the cold heart of Rosie (Sharon Stone), the girl that came between them.