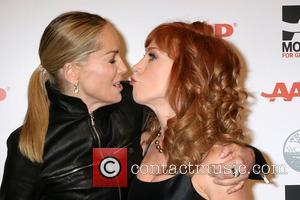 Sharon Stone and sexy Colombian actress Sofia Vergara are set to heat up the big screen as bisexual lovers in a new comedy.
The Oscar winner will play a dermatologist who enjoys a threesome with Modern Family beauty Vergara and John Turturro's escort character in Fading Gigolo.
A source tells Life & Style magazine, "Sharon thinks it's going to be a lot of fun playing the lover of one of the hottest actresses out there. The scenes will be steamy!"
Legendary filmmaker Woody Allen has been cast as The Big Lebowski actor's pimp.
The movie will begin shooting in New York in April (12) with Turturro also serving as director.
Stone is no stranger to lesbian love scenes - she romanced a woman in 1992 thriller Basic Instinct and played comedienne Ellen DeGeneres' lover in 1996 Tv movie If These Walls Could Talk.