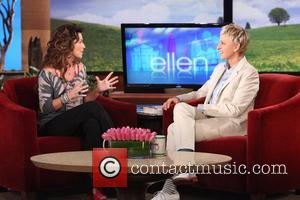 Picture: Shania Twain makes an appearance on NBC's 'The Ellen DeGeneres Show' on Thursday, May 12th. Ellen talks with Shania about her book 'From This Moment...

Shania Twain, the multi-million selling Canadian singer, is returning to the Country Music Television Awards seven years after her last appearance. Shania Twain, whose last album 'Up!' was released in 2002, will present an award at the ceremony next week.
Twain is a surprise addition to the evening's list of presenters, which is billed as one of the biggest nights on the country music calendar. Justin Bieber, who's up for an award for his collaboration with Rascal Flatts, will also present. American Idol winner Scotty Mccreery will present a prize with runner-up Lauren Alaina, while Dancing With The Stars winner Hines Ward will also make an appearance. Country stars expected to perform at the event include Keith Urban, Lady Antebellum, Toby Keith and the Zac Brown Band. Twain, who has suffered with vocal problems in recent years, is currently starring in her reality television series 'Why Not? With Shania Twain', which premiered on Oprah Winfrey's network on 8th May 2011. The show follows the singer-songwriter as she sets out to recapture her past, visiting her childhood home in Timmins, Northern Ontario. Along the way, the singer has conversations with the likes of Gladys Knight, Lionel Richie and David Foster.
Shania Twain recently announced that she will release her first single in six years, 'Today (Is Your Day)', after the finale of her reality show on 12th June 2011.

Shania Twain rewears Man! I Feel Like a Woman! outfit