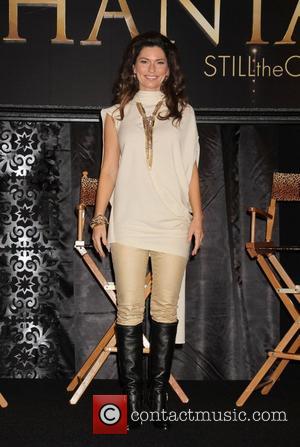 It's been too long for Shania Twain, but her return to the live circuit at on the opening night of her two-year residency at The Colosseum at Caesars Palace on Saturday in Las Vegas brought about a reaction akin to that of her debut, CBC News reports.

Emotional at her overwhelmingly warm response, no doubt from those either euphoric over their big casino-win, or nearly passed out from alcohol over their bad luck on the slots, Twain addressed the crowd, dabbing the tears from her eyes. "Thank you. Thank you so much -- you guys are going to get me all emotional, and then my eyelashes are going to fall off," she said. "This is a very overwhelming night.... It's been a lot of years for me since I've been here. I realize what I've been missing, thanks to you." Later on, she asked halfway through her set, "You guys having a good time so far?" and after the cheers, said, "I hope so, 'cause that's the only reason I do this.... Otherwise I would just stay on my lonesome and sing."

Performing at the Colosseum - a high-ceilinged, 4,298-seat modern replica of the Roman architectural marvel - inside sprawling Caesars Palace, Twain's show featured no shortage of set pieces. She first sent a jolt through the crowd by charging onstage on the back of a black stallion before launching into a rowdy rendition of Ain't No Quitter with the stage decorated to look like a Wild West saloon.