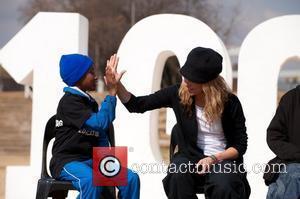 Singer Shakira is in trouble with Spanish authorities after dancing in a Barcelona fountain while filming a music video.
The Hips Don't Lie hitmaker was joined by fans as she frolicked in the city's historic Pla de Palau fountain while filming a promo for her upcoming track, Loca.
But the star failed to obtain a permit ahead of filming - and now City Hall officials have slapped the Colombian star with a fine.
Her actions were deemed a violation of strick antisocial behaviour laws, reports Britain's Daily Mirror.