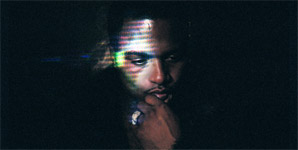 The problem with just about every concert you go to is that there's always at least one D'head who tries his/her (usually his) hardest to ruin it for the rest of the eager audience. For those familiar with either Shabazz Palaces or the Brudenell Social Club, you may be surprised to know that anyone would want to behave in such a fashion but, like I said, there's always one (a group of three in this case) who has had one too many drinks or something a little stronger and try their hardest to piss off the people behind this.

Taking this into consideration, when I left the show I was sure I'd not seen a better performance in a long, long time - D'head or not, no one could ruin this utterly spellbinding performance from what is perhaps the most exciting prospect in hip hop today. As the room darkened and the sound of tribal chants grew and grew, the sound of a guy shaking a gourd also grew and grew as the mastermind of the whole operation, Ishmael Butler aka Palaceer Lazaro, approached the stage by way of walking through the crowd before joining up with co-star Tendai 'Baba' Maraire to kick the show off with dreamlike reimagining of Black Up highlight 'Youlogy.'

This was far from an album promotion tour; sure they played a few songs from their Sub Pop released debut album (Black Up), but the purpose of the tour was to mesmerise audiences, not shift a few extra units of their album. Mesmerise was exactly what they did, going off tangent mid-song for a kalimba solo from Maraire that can only be compared to a David Gilmore guitar solo, or delivering a barrage of noise that, in any other content, would sound completely unnecessary but at the Brudenell on Monday night, it sounded more right than could be thought possible. Oh yeah, they even had their own choreographed routine with each other that was both hilarious and a great indication that a musical master-class doesn't need to take itself seriously.