Review of Everything Breaks EP by Severin

Severin may have only been together just over a year, yet the London-based duo seemingly have a catalogue of sonic expeditions and ideas in spades. Borne out of shared love of experimental electronica, swirling noise rock and cascading beats, the twosome - Elizabeth Martin and Danny Sanchez, have conjured up an exhilarating concoction of sounds that recall past exponents of genre cross pollination such as Curve and Bang Bang Machine, while casting one eye firmly on the future that lies ahead. 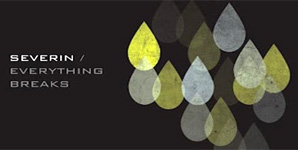 Employing one time Test Icicle Rory Attwell in the studio, 'Everything Breaks' collects four separate slabs of aural ambivalence dressed in a flurry of hardcore beats and driving synths. All the while treading on an undercurrent of buzzing, reverb-laden guitars, Martin's innocent vocal vaguely reminiscent of both a young Siouxsie and early nineties shoegoth pin-up Toni Halliday.

Lead track 'High Shot' provides a menacing introduction, Martin instructing her subject to "Keep pushing my love" while Sanchez harbours away conducting shards of brutal noise through the medium of his six-string. If there were ever an obvious soundtrack to one of the many clubnights claiming itself as a "death disco" it would probably go like this. 'Macabea' meanwhile coasts along on a tidal wave of processed beats and dystopian rhythms, not a million miles from The Big Pink at their most potent. Again the overtly coarse dynamics between Severin's creative hub rise to the fore, Martin's sugary sweet tones casting a sinister overtone as lyrical couplets like "There are those who have, and there are those who have not" slip out like melted honey from a jar.

The more reflective 'Light/Water' sets a slightly different scene to the rest of the EP, showing its creators more industrial side to boot. By the time '0806' brings 'Everything Breaks' to a close, this time mirroring Sleigh Bells panache for marrying mild and harsh mannerisms at the flick of a switch, Severin's status as ones to watch is firmly assured.

As likely to be embraced by the shoegaze set as the darkwave or big beat crews, they're a timely breath of fresh air amidst a sea of predictable mediocrity currently clogging up the capital's haunts and hiding places.

Severin, bringing the new noise in abundance. And how.