Review of Steady On Scientist Album by Seventeen Evergreen

My first acquaintance with Seventeen Evergreen was via Angels, one of those free downloads that makes the hours of trawling through the tons of soon-to-be-obscure remixes and otherwise weird off cuts on Rcrdlbl worthwhile. Essentially a mawkish, looping slab of post Goth that leant heavily on the eldritch tendencies of The Sisters of Mercy and Echo And The Bunnymen, it portents were by extension something special, signalling that finally after years of reinvigorating the more tasteless excesses of the eighties that time had thankfully forgot, we were due for some true miserabalist sugar. 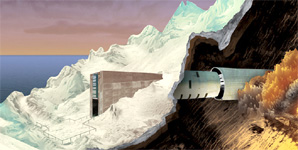 There are snatches of that rain coated angst on Steady on Scientist - most obviously on the wheezy vintage organ of President Clavioline - but instead of earnest young men from northern England quoting a direct lineage to Baudelaire, the primary influencers quickly reveal themselves as the more prosaic new psychedelia poster children MGMT.

It's a direction that the likes of Yeasayer and to a lesser extent Caribou and Animal Collective had been heading toward before messrs. Goldwasser and VanWyngarden split from the whole god damn program on the acid tinged Congratulations. The Evergreeners - LA based duo Nephi Evans and Caleb Pate - are however less intent on destroying their last vestiges of commerciality by "Doing a Syd Barrett" than their contemporaries, and despite the odd moment of well, oddness (The sludgy, heavy lidded vocoder-toting Dancespider) , they remain firmly of this world.

When prepared to play within the mainstream's boundaries, they prove themselves as capable of what can loosely be defined as pop as anyone in today's currency, as the opener Polarity Song demonstrates, the music a puppy-like hybrid of hippy optimism contrasted with traces of orchestrated synth lines. The pair also have a neat line in remembering lo-tech Eighties house, one engineered to perfection on the cheesy 303 loops of Bucky, whilst the far sleeker Wasting Time/Castlefield reminds you that very few bands actually sound authentically like New order, but some make a damn fine effort at sounding like they think New Order would sound.

In the same way that you guess many a label baulked at MGMT's original concept during the laddish dominated era of the mid-noughties, you sense that the slightly avant garde feel of Steady On Scientist may well profoundly exclude many. Those who brave going behind the curtain will find a duo not afraid to experiment, and a degree of open mindedness that may carry them a little further than they think.