Actor Seth Rogen Will Host A Bizarre Bar Mitzvah Celebration For Pal And The Interview Co-star James Franco To Raise Funds For His Alzheimer's Organisation Hilarity For Charity. 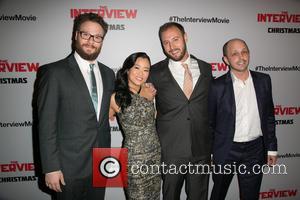 The Knocked Up star claims Franco, who is of Jewish blood but was not raised Jewish, has always expressed interest in taking part in the faith's traditional coming-of-age celebration, and he felt it would be a good idea to combine a belated bash for the actor with his annual Hilarity for Charity event.

A humorous statement from Rogen reads, "Ever since I've known James, he's been talking about wanting a bar mitzvah.

"We're excited to see him finally become a man while also helping us raise awareness and funds for people living with Alzheimer's and towards research that will lead to a cure. And in celebration we'll also have a mohel (a person who performs circumcisions) and a live bris (circumcision) for James at the event."

Rogen launched the organisation in 2011 with his wife, Lauren Miller, after her mother was diagnosed with the disease.

The variety show event takes place on 17 October (15) at the Hollywood Palladium.