Seth Rogen Plays The Dude In The Big Lebowski Play 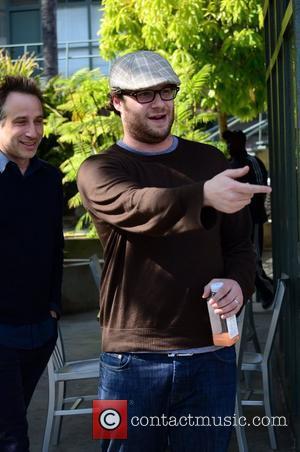 Actors Seth Rogen, Christina Hendricks, and Rainn Wilson hit the stage in Los Angeles on Thursday (29Mar12) for an adaptation of cult classic The Big Lebowski.
Rogen played slacker The Dude/Jeffrey Lebowski, portrayed onscreen by Jeff Bridges, who, through a case of mistaken identity is introduced to a millionaire mogul by the same name and is sent on a mission to rescue his new pal's kidnapped trophy wife.
Among the other stars who took part in the theatre adaptation were Mad Men's Christina Hendricks, Seinfeld‘s Jason Alexander, Tara Reid, The Office funnyman Rainn Wilson, Hank Azaria, former child star Frank Savage and comedian Nick Kroll.
Up in the Air filmmaker Jason Reitman directed the play at the Los County Museum of Art on Thursday evening.
The production is the last and final installment of the Film Independent event series, which previously saw staged readings of The Breakfast Club and The Princess Bride.
The Big Lebowski movie, directed by the Coen brothers, was released in 1998.