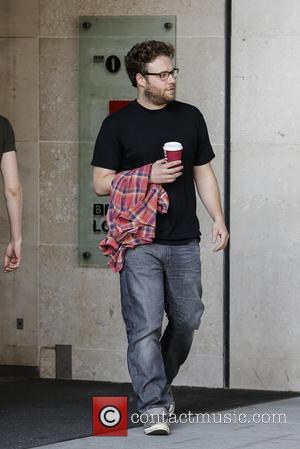 Funnymen Seth Rogen, Jonah Hill and Bill Hader led the bawdy tributes to their pal James Franco as the actor was 'roasted' in California on Sunday night (25Aug13).

The 127 Hours star was the butt of all jokes at the Comedy Central Roast as his pals mocked his movie flops, his sexuality and his much-maligned co-hosting gig with Anne Hathaway at the 2011 Oscars.

Rogen, who served as master of ceremonies, held nothing back as he picked on his Pineapple Express co-star, quipping, "He once told me he worked for 36 hours straight, which I didn't believe. The straight part, of course."

According to TheWrap.com, the host also joked, "Look at me doing all the talking while you sit there doing nothing. I feel like I'm hosting the Oscars with you!"

But Franco was given some respite at the Tv taping in Culver City, California, when the comedy stars let rip at one another.

Poking fun at chubby actor Hill, Jeff Ross said, "When Jonah Hill's agent told him Quentin Tarantino wanted him to be in a spaghetti western, Jonah said, 'You had me at spaghetti.'"

Franco's roast will air as a special on U.S. Tv network Comedy Central on the U.S.'s Labor Day (02Sep13).