The Hunger Games: Catching Fire will arrive in cinemas this month amidst a flurry of excitement and anticipation from the film's already ardent following. Any event as big as a new Hunger Games movie is prone to receive its fair share of spoofing, and with 'The Hungry Games: Catching Fur,' the Sesame Street gang may have already come up with the best spoof of the all. 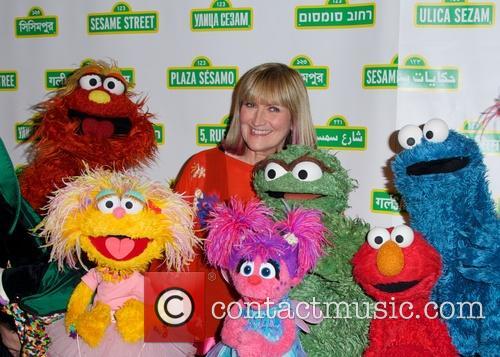 Susan Thompson with some of the Sesame Street puppets, including (far R) the Cookie Monster

Starring the Cookie Monster in a segment aimed at getting kids more familiar with patterns, the 5-minute clip stars CM as Cookieness Evereat, a volunteer from the first 'The Hungry Games,' who returns to the competition for one more time.

Joined by a pita bread (a play on Josh Hutcherson's Peeta), Finnicky (a spoof on Sam Claflin's Finnick) and Tick Tock (a parody of Amanda Plummer's Wiress), the four journey through a jungle full of unsolved puzzles and rubbling stomachs. When Cookieness is finally done with the challenges, Finnicky warns him that there are more on their way. The actual Hunger Games sequel is much less to do with solving pattern-based problems and more concerned with survival and destiny in a dystopian future, but you can see the connection when the Cookie Monster is gorging on a plate of baked goods...

This is the latest in a long line of Sesame Street parodies, many of which you would think are way too inappropriate for a kids show, which have included in the past, Twin Peaks, Casablanca, Six Feet Under, Desperate Housewives, True Blood and Mad Men.

The Hunger Games: Catching Fire is the sequel to the mega-successful first Hunger Games film of 2012 and once again stars Jennifer Lawrence, Liam Hemsworth and Josh Hutcherson. The film opens internationally on 22 November.

The Hunger Games: Catching Fire is out this week