Sennen's new single, Vultures, will be released through Indelabel on March 5th. It is taken from their forthcoming third album, called Lost Harmony, which will be released in the spring of 2012. Sennen will be playing London's Barfly on March 8th, 2012, with a UK and European tour planned for May of the same year.

The video for Vultures was directed by Broken Pixel AKA Ashley Dean, who was formerly in iLiKETRAiNS.

Formed in 2002, Sennen are Larry Holmes (vocals, guitar, keys); Rich Kelleway (vocals, guitar); James Brown (drums, keys) and Tim Kelleway (bass). The band's first two albums - Where The Light Gets In and Age of Denial - were released on Hungry Audio in 2008 and 2010 respectively. Whilst working on Lost Harmony, the band recruited the help of producer David M Allen, who has worked with The Cure; The Human League and Depeche Mode.

Over the years, Sennen has received support from DJs Zane Lowe and John Kennedy. Their cover version of New Order's Bizarre Love Triangle was used in an episode of US teen drama One Tree Hill. 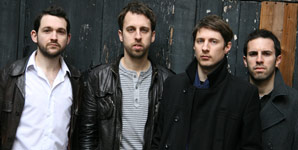