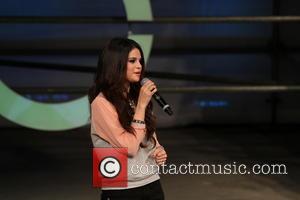 You've got to get out of the Disney castle some time, and there's no use sneaking out the back door. As Britney Spears did before her (in a school girls uniform, singing 'hit me baby, one more time'), Selena Gomez has bust right outta there with seemingly no holds barred, as she opts for Spring Breakers to be her first major non-Disney pursuit. New posters for the movie see her clad in a tiny blue bikini, an image which is a far cry from the innocence of her Disney days.

It's not just the poster image that wont be accessible for Gomez's young fans, the premise of the movie is for a distinctly older audience as well. Gomez plays one of four best friends who live together at college. Without enough money to go on vacation, they rob a restaurant to fund their trip to Florida. When they get there they're arrested on drugs charges, but a drug dealer (James Franco) bails them out. His help doesn't come for free though and he expects them to pay him back one way or another.

Another poster in the series features Franco who is almost unrecognisable, with cornrows, tattoos, shades and a gun shoved in his jeans. Vanessa Hudgens, Ashley Benson, and Rachel Korine also star. Directed by film maker Harmony Korine, who is best known for Kids and Mister Lonely. Spring Breakers is set for release March 8th. (Huffington Post)