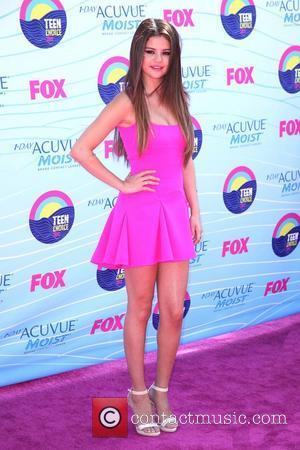 Is Selena Gomez trying to shake off her squeaky-clean teen-star image? If she is, then aligning herself with Harmony Korine (he of Kids and Gummo fame) is a pretty good place to start. Gomez's performance in Korine's latest movie Spring Breakers is being described, pretty much across the board, as "raunchy" and Chicago Tribune have reported that even Gomez admits that she was pushing some of her own boundaries in order to be involved in the film.
"People do put a label on you," Gomez told reporters after the movie's screening at the Venice Film Festival, referring to her background as a Disney actress. "I know that I have younger fans, and this is an opportunity for myself to kind of grow. It is a little shocking, I think, for the younger audiences ... but I think it was right for me." She attributes Harmony with pushing her as an actress, saying "I did things I didn't even know I could do on the movie and I do think it was because I trusted Harmony."
However, Gomez, who is currently dating the well-behaved pop star Justin Bieber, also told reporters that she remained conservative in her choices for this movie, revealing that she had an opportunity to play an even racier character but turned it down. "I just didn't think I was ready for it, and I do think that Faith is right for me at this time in my career and in my life. Of course eventually I'm going to kind of work my way up to that I think." So far, the critical response to the movie has been mixed, with some dismissing the tale of America's disenfranchised youth as being "implausible and pretentious."