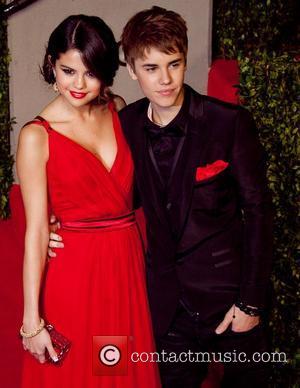 Selena Gomez and Justin Bieber stayed together in a penthouse suite before their appearance at The Oscars on Sunday (27th February 2011).
SELENA GOMEZ and JUSTIN BIEBER went public with their relationship at the post-OSCARS Vanity Fair party at the weekend and had stayed together in a luxury penthouse suite the previous night, according to US Magazine.Before attending the star-studded bash, the couple had stayed at the exclusive St Regis Monarch Beach resort in Dana Point, California. An insider revealed that during their stay at the five-star hotel, the couple were "Affectionate, cuddling and holding hands", whilst on a stroll along the beach. They capped the evening off with a four-star dinner at the resort's luxury restaurant 'Stonehill Tavern'. The following evening, the couple arrived hand-in-hand to the Oscars party at the Sunset Tower Hotel, confirming speculation that they are an item. They had been photographed together last month strolling hand-in-hand down Santa Monica Pier.
Bieber, who turns 17-years-old today (1st March 2011) will soon embark on a UK tour with the 10-year-old pop sensation Willow Smith. SELENA GOMEZ recently completed work on her forthcoming movie 'Monte Carlo'. The comedy-adventure is set for release on 1st July 2011 and also stars Leighton Meester and Katie Cassidy.