Sean Penn Has 'No Apologies' For Green Card Joke 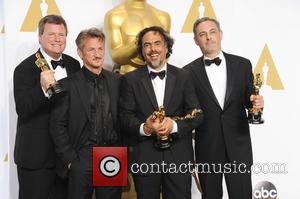 Sean Penn has urged critics of his controversial "green card" joke at the Oscars to lighten up after insisting he has "absolutely no apologies" for poking fun at his director pal Alejandro Gonzalez Inarritu.

The actor was invited to present the prestigious Best Picture prize at last month's (Feb15) ceremony and as he opened the envelope to reveal Inarritu's Birdman as the winner, he quipped, "Who gave this son of a b**ch his green card?"

The Mexican filmmaker, who worked with the star on his movie 21 Grams, laughed off the comment as a joke between old friends in the aftermath of Hollywood's big night, and now Penn has spoken out about the incident, claiming those who deemed his language offensive to immigrants missed the point he was trying to make.

Brushing off the backlash, he says, "I'm always surprised by flagrant stupidity. I keep having more hope.

"I have absolutely no apologies. In fact, I have a big f**k you for anybody who is so stupid not to have gotten the irony when you've got a country that is so xenophobic. If they had their way, you wouldn't have great filmmakers like Alejandro working in this country. Thank God we do."