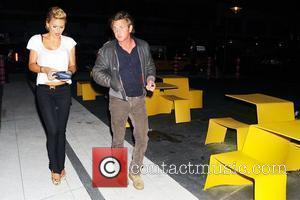 Sean Penn's mystery London date was Sports Illustrated model Jessica White, an ex-girlfriend of American football star Terrell Owens.
The pair had gossips in a frenzy earlier this month (Sep09) when they were spotted enjoying two nights out together in the British capital - just a month after Penn's wife Robin Wright Penn handed him divorce papers.
Penn and White were seen laughing and joking and the Oscar-winner even fed the model food from his own plate.
Besides dating Buffalo Bills wide receiver Owens, 25-year-old White has appeared in Jay-Z and John Legend music videos and modelled for Ralph Lauren, Oscar de la Renta, Marc Jacobs and Tommy Hilfiger. She was once dubbed the "model of her generation" by former catwalk queen Tyra Banks.
She's not the first model Penn has been linked with - he was spotted with Petra Nemcova after a previous split with Wright Penn.
The acting couple first began divorce proceedings in December 2007 only to officially end their separation four months later.
And in April (09), the actor filed papers for a "legal separation", just days before the couple's 13th wedding anniversary.
They went on to dismiss the bid a month later (May09), only for Wright Penn to kickstart proceedings again last month (Aug09).