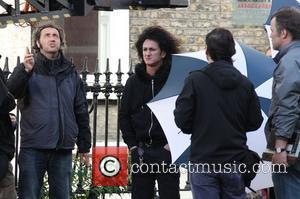 Picture: Sean Penn on the set of his new film 'This Must Be The Place' being filmed on location at Mount street in Dublin. Dublin, Ireland...

Actor and activist Sean Penn has been honoured for his charity work in Haiti with this year's (10) Hollywood Humanitarian Award.
The Oscar winner co-founded the J/P HRO Haitian Relief Organization in the wake of the January (10) earthquake and has spent months in the Caribbean nation helping to distribute food and medical supplies, as well as build schools and hospitals.
He has also set up a campsite in the country's capital, Port-au-Prince, to help provide temporary housing for an estimated 50,000 survivors left homeless by the tremors.
Penn was made a knight in Haiti in July (10) - and now his tireless charity work has landed him another accolade.
He'll be the star guest at next month's (25Oct10) Hollywood Awards Gala Ceremony to pick up the humanitarian prize.
Hollywood Film Festival Founder and Executive Director Carlos de Abreu says, "It is an honour to recognise the inspiring humanitarian efforts that Sean Penn and his J/P Haitian Relief Organization have been providing to the great people of Haiti."