Sean Lowe and Catherine Giudici, from ABC's 'The Bachelor', married in front of million of people as the television network broadcast the ceremony live on Sunday (Jan 26th). The former 'Bachelor' star Sean Lowe cannot use that name any longer.

Millions of viewers watched Mr Lowe search for love during season 17 of the ABC reality show and now they watched the 30 year-old marry that love.

Lowe and Catherine Giudici, who first met on 'The Bachelor', brought their big day to the small screen as ABC aired the ceremony live on Sunday (Jan 26th), from the Four Seasons Resort-The Biltmore Santa Barbara.

However, two very important individuals who couldn't make the wedding were the couple's dogs, so to compromise the canines were featured on their wedding cake.

"Our dogs are so important to us. They're the loves of my life," Lowe told ABC News. "So, my groom's cake is an exact replica of my two dogs, a boxer and a chocolate lab. It looks incredible. Charm City Cakes in Los Angeles designed this crazy cake for us and it's amazing."

Sean's father officiated the romantic occasion and described it as "an epic fairy-tale on display for the whole world to see."

The crucial part of the day came, and the loved up couple looked into each other's eyes and were joined by millions of viewers as they exchanged their vows.

Catherine said to Sean, "The first time that I saw you, you were like a light to my bug. I had to find you. You mesmerize me with how brightly you shine. Sometimes I feel like I'm going to explode by how much I love you ... I'm completely consumed by you ... I promise to love you after my heart bursts ... You are my dream and my reality." 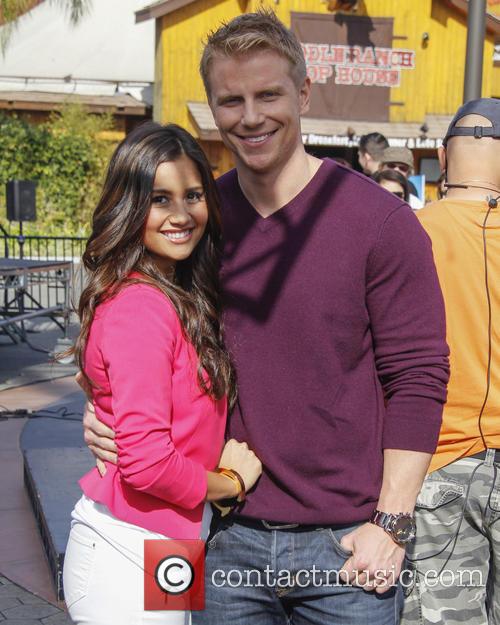 Sean then told her, "From the moment I met you I wanted more. You had me hooked from the beginning and I didn't want to let you go. We met in the strangest way possible ... I know that we met on The Bachelor so that I could fall in love with my best friend ... Every day I am encouraged by your love and your selflessness ... I'm going to love you for eternity."

On the day, Sean Lowe posted a photograph on his Instagram page of when he first met Catherine on 'The Bachelor', with a caption that read "Today is the day I marry my best friend."

The pair got engaged in November 2012 in Thailand, during the season's finale, and are now husband and wife, Congratulations!