The Addicted tells the fictional story of a resident at 'The Manor' Drug Rehab Unit in London and the horrendous treatment he receives. The patient, David, is being kept addicted to heroin by Clinical Director of the institute Chris Hunter so he can continue pursuing his affair his David's wife. Eventually poisoning David with contaminated heroin he is left with horrific facial disfigurement and chronic pain, eventually hanging himself. Twenty-five years pass with the institute falling into disrepair, eventually becoming derelict. Nicole, a budding TV journalist and the daughter of Chris and David's former spouse, along with boyfriend Adam and other friends decide to spend a night in the now abandoned rehab unit armed with filming equipment having heard reports of paranormal activity. The gang are of course not the only ones spending the night at the former rehabilitation centre, with all manner of spooky goings on occurring. 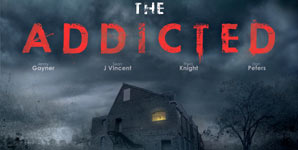 The Addicted tells the fictional story of a resident at 'The Manor' Drug Rehab Unit...