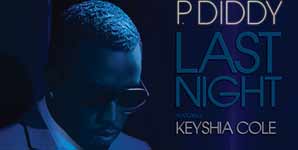 Ã¢Â€Â˜Last NightÃ¢Â€Â™ is the title of P.DiddyÃ¢Â€Â™s explosive new single produced by the man himself and Mario Winans, due out on March 12th through Bad Boy/Atlantic Records. Featuring hot girl, Keyshia Cole, the completely seductive track is the third to be lifted from the phenomenal Gold certified album, Press Play, which has sold well over 100,000 copies in the UK alone. Released ahead of what will truly be an historic occasion Ã¢Â€Â“ the pairing of two of Hip-HopÃ¢Â€Â™s heavyweights, Snoop Dogg alongside P Diddy for the first time ever.