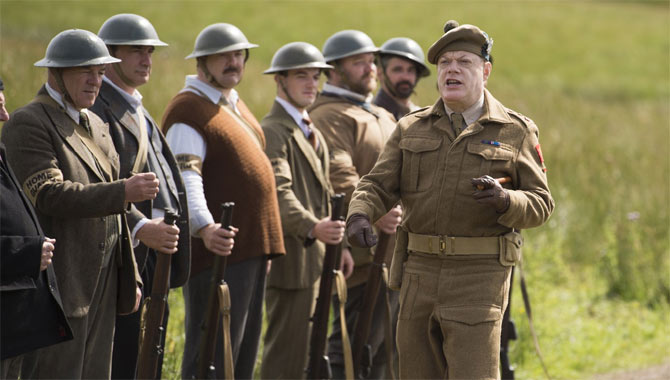 Harry Potter And The Chamber Of Secrets Review

The beloved Harry Potter returns to screens, a scant year after his most debut, with the film version of book two in the unfathomably popular Harry Potter series, Harry Potter and the Chamber of Secrets. Unfortunately, while the Potter-obsessed will likely find few faults with the film, this sequel captures much less of the original's magic. (And while I've not read the books, I understand the same can be said for the second novel as well.)

Secrets finds Harry (Daniel Radcliffe) back at home with his Muggle family on summer vacation, locked in his room (though no longer under the stairs). Before long, Harry is set to return to Hogwarts -- despite the insistence from his uncle that he is no longer allowed to study magic. But a daring prison break, courtesy of the Weasley family -- including Harry's best bud Ron (Rupert Grint), gets Harry back to school, despite the meddling of a Yoda-like "house elf" named Dobby (very obvious CG). The masochistic Dobby tries to convince Harry that his life is in danger if he returns to Hogwarts -- though in reality his life appears more in danger due to Dobby's "helpful" meddling.

Harry of course does return to Hogwarts, where all his familiar experiences await him. Hermione (Emma Watson) is still the class brain. Hagrid (Robbie Coltrane) is still the school clown. Snape (Alan Rickman) is still Snape. The new additions to the cast include a new Dark Arts professor, Gilderoy Lockhart (Kenneth Branagh), a narcissistic wizard with questionable ability, as well as the father of Harry's platinum blonde archrival Malfoy, Lucius (Jason Isaacs).

While the cast is still in fine form (the exception being a shockingly haggard Richard Harris as headmaster Dumbledore; Harris died a few weeks before the film's release), it's the story that is decidedly lacking in this episode. The titular Chamber of Secrets is a legendary room inside Hogwarts fabled to hold a menacing creature. It can only be opened, we're told, by an heir to the Slytherin family. When a mysterious message appears on the Hogwarts walls in blood, Harry begins hearing hissing voices, and students begin to turn up paralyzed. It appears the Chamber of Secrets has been opened -- and suspicions fall on Draco Malfoy (Tom Felton) as the heir. Or is it Harry?

What follows is another nearly-three hours of exposition as Harry, Ron, and Hermione attempt to crack this riddle, Nancy Drew-style, while the body count at Hogwarts keeps rising. Mercilessly padded, the movie drags us through ages of all-too-familiar territory: a Quidditch match ends predictably; spells go awry; the trio works on a potion together; one-note characters appear only to say their line and soon exit the story. Finally, invariably first-on-the-scene Harry coincidentally discovers a blank diary -- it's amazing how much coincidence drives the plot -- that leads him on a circuitous path to discover the Chamber, just in time for a final showdown with what looks astonishingly like a miniature-golf hazard.

Jeez, I'm bored just writing about it. So much of Secrets is so unnecessary that my audience was way ahead of the circuitous yet ultimately very simplistic story. Kids spent the three hours running up and down the aisles -- only their parents had the fortitude to stay with the plot. That said, this installment is much funnier than the original, and it has a bit more of a grown-up sentiment to it. Still, it's going to take more than an ominous voice in the walls and a flying car to keep even the most patient adults interested in a three-hour movie.

Chamber of Secrets is enjoyable for many of its stretches, and it's unfortunate that director Chris Columbus (giving up the reins for episode 3) didn't take more chances with the source material, excising the many irrelevant parts and adding in a bit of his own vision. As such, we have a movie that plays out in fits and starts of fun alternating with boredom. Sad to say, the kids will probably want to leave midway through this one and ask you to replay the original on DVD when you get home. Poor Harry, when we see you again (in two years' time), I hope you'll have regained a bit of your magic.

As with Potter #1, the film comes to DVD in an exhaustive and impressive two-disc package, headlined by one of the most aggressive 6.1 channel audio tracks I've ever had the privilege to hear on DVD. This film thankfully makes it much easier to find the deleted/extended scenes, all of which are well worth checking out and add a bit of depth and flavor to an otherwise so-so movie. There are also tons of games for the kids and a few interviews for the adults, including one with J.K. Rowling.

Try putting right down the middle of the course.