Jane Got A Gun Review

With its grindingly low-key tension and unusual perspectives, this Western has a chance to revamp the genre in intriguing ways. The first-rate cast adds plenty of depth to the usual roles, including a strong female point-of-view from Natalie Portman, who also produced the film. But some rather simplistic thematic touches undermine the originality, and the film never quite cracks through the surface to become something meaningful. 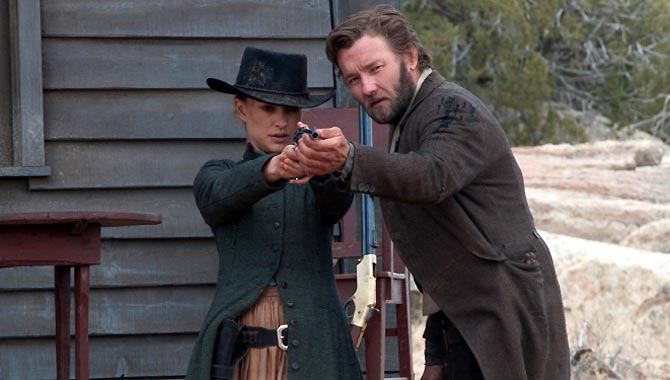 It's set in 1871 New Mexico, where Jane (Portman) lives on a hidden ranch with her outlaw husband Bill (Noah Emmerich) and their young daughter. But Bill's been badly injured, and the notorious scoundrel Bishop (Ewan McGregor) has vowed to track him down. For help Jane turns to her ex-fiance Dan (Joel Edgerton), an angry gunslinger who has never got over being abandoned by Jane all those years ago. He agrees to help her, and of course Bill isn't too happy about this, but he's too injured to protest. And Jane is so fiercely independent that she refuses to let her history with these two men define her future.

The premise is packed with all kinds of intriguing layers, but the script continually over-explains everything with a series of flashbacks to Jane's earlier encounters with Dan, Bishop, Bishop's hotheaded brother (Boyd Holbrook) and a particularly brutal desperado (Rodrigo Santoro). Not one of these people has even a hint of morality about them, which gives the actors a chance to inject a lot of complex texture into their performances. These are tough-minded men who never stop to think about the rule of law. And Portman's Jane is steelier than all of them, a woman who makes her own hard decisions in a place that doesn't let anyone off easily. Portman is terrific in the role, even if director Gavin O'Connor (Warrior) undermines her with his rather straightforward approach. Even so, her scenes with Edgerton and McGregor crackle with subtext.