The Bull Riding Antics That Landed Scott Eastwood In Trouble With Movie Bosses Are To Be Shown On U.s. Tv On Wednesday Night (08apr15). 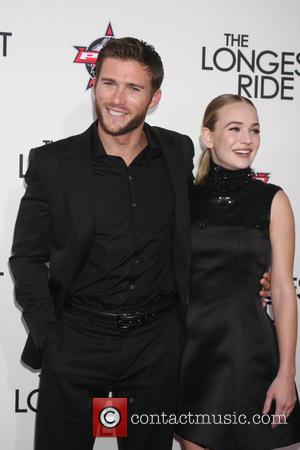 Picture: Scott Eastwood and Britt Robertson - A host of stars were photographed as they attended The Longest Ride Premiere which was held at the TCL...

Clint's son was forbidden from mounting the bulls during filming of new movie The Longest Ride, in which he plays a wild rider, and so he sneaked off after the project wrapped and hopped on a mad beast just so he knew what it really felt like to be bucked.

He recently told WENN, "I was a big fan of the sport prior to the film. I knew some of the stars. I had gone to rodeo as a kid; I'd been to the Salinas rodeo.

"I took the role very seriously. I was hanging with the guys and watching them buck bulls and drinking beers with them. They never let me on a bull but I went behind (studio) Fox's back and they weren't too happy about it! I went and bucked a bull after filming. I didn't want to go around and talk that I knew what bull riding was about without really bucking a bull. I lasted about two and a half seconds!"

Now footage of his wild ride is to be shown on TV chat show The Tonight Show Starring Jimmy Fallon when Eastwood is a guest on Wednesday.

He says, "We have the video and we're putting it on Jimmy Fallon... It's gonna be the first time it's ever seen."