Scott Disick kissed a mysterious blonde on Friday night (24.07.15), just weeks after he was dumped by his girlfriend of nine years, Kourtney Kardashian. 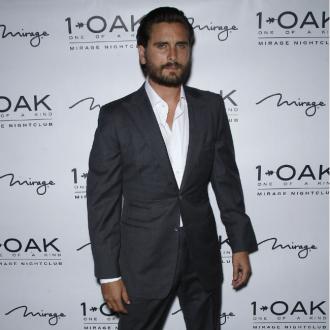 The 32-year-old reportedly chatted with the blonde beauty before sharing a steamy kiss while hosting a night at Mirage's 1 OAK nightclub in Las Vegas, defying earlier reports stating he had been well-behaved at the club and had only been drinking water.

And while Scott was out partying with his pals, his 36-year-old ex Kourtney was busy at home looking after their children and posted a photo on Instagram of her watching 'Scooby Doo' with her eldest son.

She wrote: ''Scoobs in bed with my boy. #perfectfridaynight (sic)''

The saucy incident comes just weeks after his girlfriend of nine years Kourtney Kardashian - with whom he has Mason, five, Penelope, three, and seven-month-old Reign - dumped him after racy images emerged showing him getting close with his ex-girlfriend Chloe Bartoli while in Monte Carlo.

On Thursday (23.07.15), the former couple were seen together having lunch with their kids for the first time since their split was announced and although Kourtney has not yet decided whether the relationship is over for good, she has told him he needs to ditch his drinking for the sake of their children.

A source told HollywoodLife.com: ''She's set him a target, to quit boozing and work on being a better person.

''She hasn't told him that'll win her back, but wants him to change his ways for the family. It's up to Scott now to make those changes, and if he does, there could be a possibility Kourtney would give him another chance.''

Scott Disick Is Focusing On Being A 'Good Dad', While Kourtney Kardashian Is 'Not Ready To Date Yet'