Braun took to his Instagram to send his sympathies to those who had lost loved ones in the attack, and to praise the actions of Mancunians who helped the victims.

Ariana Grande and her manager Scooter Braun have vowed they will “not let evil win” in the wake of the deadly terrorist attack at her concert in Manchester earlier this week.

The 23 year old star’s manager took to Instagram on Wednesday night (May 24th), two days after the devastating attack perpetrated by a suicide bomber that claimed the lives of 22 people and left dozens more injured at MEN Arena immediately after Grande’s gig there on Monday.

In addition to paying tribute to the families of those who lost their lives, Braun also praised the spontaneous acts of kindness from Mancunians who offered aid, comfort and beds for those shaken or stranded in the city following the attack.

Bieber was reportedly asked to perform at a Republican event during the GOP Convention.

Justin Bieber was reportedly offered $5 million to play at a Republican party event earlier this month. The singer is said to have turned down the offer after longtime manager Scooter Braun threatened to quit if he accepted the gig. 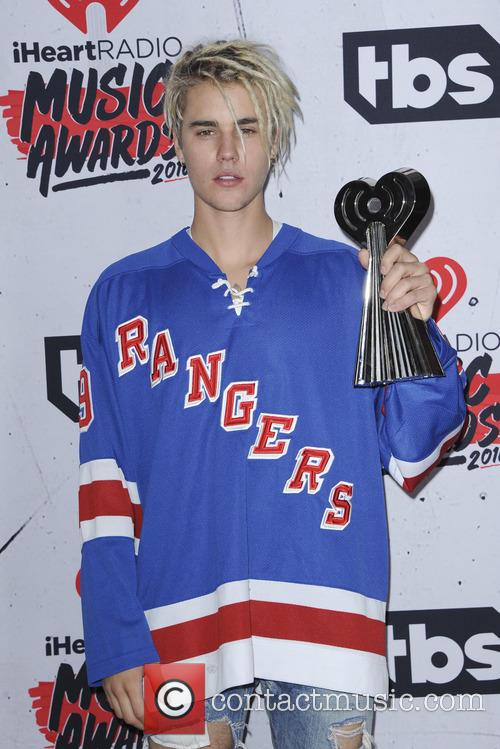 According to TMZ, a promoter contacted Bieber’s people with the offer, asking him to perform for 45 minutes at a venue near the Quicken Loans Arena, where the Republican National Convention was being held.

Sprightly young thing Justin Bieber collapsed on-stage from shortness of breath at London's O2 Arena on Thursday night (March 7, 2013) according to representatives of the Canadian teen pop star. Bieber, 19, who's suffered the worst week of publicity of his short career, returned to the stage before being taken to hospital.

"[Justin's] heading to the doctor now," Bieber's spokeswoman said after the show, "He fainted and took a 20-minute reprieve and was given oxygen." Strangely, his manager Scooter Braun told the sold-out audience in various amateur videos posted on-line, "Justin got very light of breath; the whole show he has been complaining.He's backstage with the EMTs [emergency medical technicians] and the doctor."

But of course, a man of the people like Justin Bieber - the man who made his fans 40 minutes earlier this week - "ignored doctor's orders" and returned to the O2 arena to finish the performance. What a hero. His spokesperson confirmed Bieber had not been suffering from any health issues prior to the show.

By Hayley Avron in Lifestyle / Showbiz on 09 January 2013

Continue reading: Timber! Is Justin Bieber Teetering On The Brink Of A Fall From Grace?

Scooter Braun couldn't keep his cool when he heard that his young star, Justin Bieber - whom he manages - gleaned NO nominations for The Grammy Awards 2013.

Airing his grievances on Twitter, he was quick to point out that he did in fact have one artist under his wing deemed worthy of Grammy consideration. "First... congrats to Carly Rae Jepsen," he tweeted, "Thought you deserved a best new artist nom, but proud Call Me Maybe got you 2 noms. So proud of You. Second... this time there wont be any wise words, no excuses, I just plain DISAGREE. The kid deserved it. Grammy board you blew it on this one." The ceremony will take place in February, and Braun thinks Bieber deserves recognition because he's really "delivered" this year. "Huge successful album, sold out tour, and won people over... This time he deserved to be recognised and I don't really have any kind nice positive things to say about a decision I don't agree with," he went on to tweet.

To be fair to Scooter and Bieber, the "Baby" hitmaker has had a great year, and if Jepson is in line, then we can't figure out why Bieber isn't on the list. Another high profile snub was Nicki Minaj, but considering her penchant for making a scene, we're pretty sure you'll hear that from her soon enough.

By Contributor in Music / Festivals on 06 December 2012

Proof that the Grammy Awards panel do actually discuss the merits of the albums and artists they pick for their shortlists, rather than just look at the biggest selling, came with the exclusion of pop starlet Justin Bieber from any of the major categories – and his manager wasn’t happy.

Bieber and his camp are used to getting things their own way, certainly his career’s attested to that given the 18 year-old’s phenomenal success. However, despite selling 374,000 copies of his second album Believe in the first week of release in the US earlier in the year, the album wasn’t deemed good enough by the panel to have any impact on their categories. Though Bieber himself hasn’t reacted to the news – awards are awards after all, it’s an inexact science – his manager Scooter Braun geared himself up into a rage and took to Twitter to lambast the decision.

"I just plain DISAGREE. The kid deserved it.” He thundered, going on to say "The kid delivered. Huge successful album, sold out tour, and won people over. This time he deserved to be recognized and I don't really have any kind nice positive things to say about a decision I don't agree with." In a message to Bieber’s fans, Braun added "Looks like we get to stay the underdog a little longer". Indeed, multi-millionaire underdogs. Probably the best kind of underdog you could be really.

A blog post on YouTube announced the figures, though warned that Bieber was still the king of social media, "Psy's official channel now has over 1 billion views, a considerable number. Views on Bieber's Vevo channel alone, however, still total over 3 billion," it read. However, any sense of a battle brewing between the pair is severely unfounded, given that Bieber's manager Scooter Braun has already signed up Psy with the intention of releasing an English-language track in the near future. Real name Park Jae-Sang, Psy, 34, attended the Berklee College of Music in Boston though grew up in the upscale Gangnam district of Seoul. His released an album of hip-hop tracks in 2091, though it was Gangnam style and that horse dance that catapulted him to global prominence this year.

Up until very recently, Justin Bieber’s music video ‘Baby,’ which has been online since its February 2010 release, was previously the most-watched YouTube video of all time. The South Korean rapper Psy has very swiftly snatched that accolade from the Canadian pop star, though. Psy’s ‘Gangnam Style’ has now garnered over 803,761,000 views on YouTube since it was posted there on July 15, 2012, Billboard have reported. That’s a pretty rapid ascent, in comparison!

‘Gangnam Style’ has already taken the mantle for the most number of ‘likes’ on YouTube (5.3 million, and counting), whereas ‘Baby’ only has 1.4 million. Psy is understandably pleased with his latest achievement; we’re guessing he’s barely had time to take a breath since the success of ‘Gangnam Style’ started snowballing, but he did find the time to post a message on his Twitter page, saying “‪#GangnamStyle just became the most watched video ‪@YouTube!! ‪#History” although, it is entirely possible that someone else posted that for him, of course.

By Rich Cline
Good
Clearly designed with his 12-year-old female fanbase in mind, this backstage myth-making doc wants to show that Justin Bieber is "just a regular kid who had a dream that came true". As if.