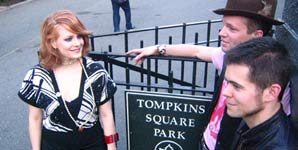 Emerging out of the New York gay scene in 2001 as "Dead Lesbian and the Fibrillating Scissor Sisters," the five-piece glam dance-rock-funk band make pretty unlikely stars in the anodyne world of modern pop.
Yet, in the UK at least if not quite in their home country, the Scissor Sisters have stormed the charts with a succession of singles that indulge the band's love of high campery, bitchy humor, 1970s MOR and disco -- often in the same song.

The band broke through in 2004 with an audacious cover of Pink Floyd's "Comfortably Numb" which transmogrified the prog rock dirge in to a falsetto disco stomp.

A succession of hits followed, all taken from the band's platinum-selling eponymous album, most notably the raucous coming out anthem "Take Your Mama."

Formed by singer Jake Shears and keyboard player/bassist Babydaddy, the Scissor Sisters' sound was completed when vocalist Ana Matronic joined the group after giving them their first live performance at her Lower East Side cabaret club. Guitarist Del Marquis and Paddy Boom on drums make up the rest of the band.

Musically the Scissor Sisters have been described as "radio-friendly soundtracks for the morning after," with David Bowie, Elton John, Roxy Music and Frankie Goes To Hollywood among their more obvious influences. Their high energy live shows also owe a debt to burlesque theatre and the Studio 68 New York disco scene.

The band's as yet untitled new album, due to be released later in 2006, was described by one insider to the NME as "jamming in a Central American jungle with people who have spent time in a studio with Def Leppard, Elton John coming by to make tea and lay down some mean Bo Diddley grooves, picking banjos above a hair extension parlor, employing a 25-piece choir comprised solely of unemployed Brooklyn haircutters, a famous glam rock figure (or two) wondering just what they can buy at the Jamaican grocery downstairs and plenty of swimming with, and jumping, sharks."

More prosaically, Ana Matronic says, "What we do is about people displaying their fantasies on the outside, trying to break out of the everyday, and look like their dreams."

Scissor Sisters - Any Which Way