Scarlett Johansson is being lined up for the role of Elizabeth Bennett in a movie adaptation of Seth Graham-Smith's 'Pride And Prejudice and Zombies'. 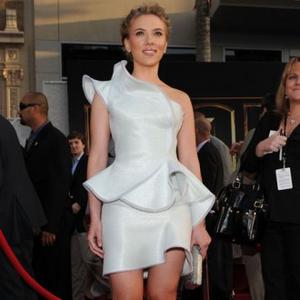 Scarlett Johansson is top choice to play Elizabeth Bennett in 'Pride And Prejudice and Zombies'.

The 'Iron Man 2' actress is being lined up to take the leading role in the film following Natalie Portman detachment from the project.

Bradley Cooper is favourite to star alongside Johansson as the leading man Mr. Darcy.

The movie is based on the Seth Grahame-Smith novel that adds zombies into the mix of JANE AUSTEN's classic romance tale.

The role of director is also up for grabs, with 'Prince of Persia' filmmaker Mike Newell among the frontrunners, Deadline.com reports.

David Slade - who recently worked on 'The Twilight Saga: Eclipse' - is also in the running.

'Pride and Prejudice and Zombies' is due to be released in 2011.

Scarlett's schedule is almost empty at present, with 'The Avengers' - currently in pre-production - her only forthcoming project.

'The A-Team' star Cooper is currently filming 'The Hangover 2', the follow-up to the hugely successful 2009 comedy movie 'The Hangover'.