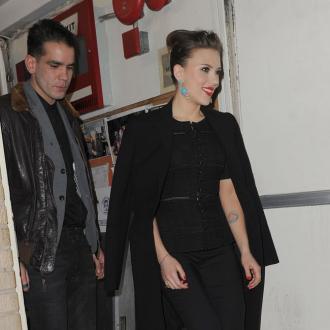 Scarlett Johansson has sparked rumours she is engaged.

The 28-year-old actress - who was previously married to Ryan Reynolds for two years before their divorce was finalised in June 2011 - was spotted with a huge diamond ring on her engagement finger while strolling around New York with her French boyfriend of three months Romain Dauriac.

The 'Hitchcock' star was sporting a pear-cut diamond ring as she wandered around the East Village with the 30-year-old journalist, according to the MailOnline.com.

The couple began dating in November after being introduced by mutual friends, just weeks after the actress split from her boyfriend of one year Nate Taylor.

Scarlett was previously said to have been desperate to keep her relationship with Romain, who is the former editor of French urban art magazine Clark, and is now the manager of a creative agency - under wraps since they met.

Both Scarlett and Romain are close friends with French tattoo artist Fuzi, who tattooed Scarlett with a horseshoe and the message 'Lucky You', on her rib cage.

The actress has barely been single since her split from Ryan, who is now married to former 'Gossip Girl' star Blake Lively, 25, and previously dated Sean Penn, 52, before meeting Nate.

The 'Avengers' star admitted last year she liked being married but hinted that she isn't interested in tying the knot again for quite a while.

She said: ''I got married when I was young and it was incredibly romantic and I liked being married, actually.

''But it is different. It's hard to put into words. To me, being in a functioning relationship doesn't mean you have to be married.