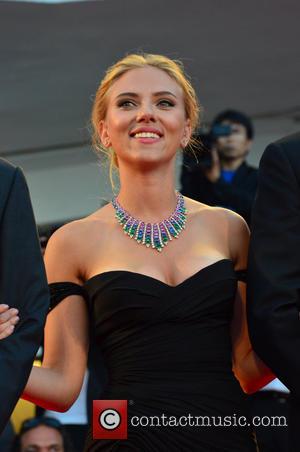 Remember that guy Scarlett Johansson turned up to the Hitchcock premiere with? The French guy?

The 28-year-old actress has been dating Romain for about ten months. According to E! News, he is a French journalist and current editor of the magazine Clark, which specializes in urban art, as well as the manager of a creative agency.

Dauriac reportedly proposed with an Art Deco ring around a month ago.

Following reports coming out of the Venice Film Festival this week, spokesman Marcel Pariseau told AFP: "I can confirm that Scarlett and Romain are engaged. They haven't chosen a date for the wedding."

Johansson is in Venice to promote her latest movie, Jonathan Glazer's sci-fi flick Under the Skin in which she plays an alien who hunts and kills men in the Highlands of Scotland. It received polarizing reviews following the premiere in Italy.

"The word was that Glazer was working on the edit at a glacial pace that would make Terrence Malick proud. Now that it has finally debuted, it appears that in the end Glazer simply gave up on trying to find a cohesive story," wrote Kaleem Aftab of The Independent.

Scarlett Johansson in Jonathan Glazer's 'Under The Skin'

"In a perfect world, Glazer would win the top prize on Sunday and not have to wait another nine years before he makes his next film. But we do not live in a perfect world, and Under the Skin is perhaps best viewed as an icy parable of love, sex and loneliness," mused Xan Brooks of The Guardian.

Johansson, who has been nominated four times for Golden Globes, was previously married to the actor Ryan Reynolds, though the couple announced their separation in 2010 and divorced the following year.

Watch the Under the Skin trailer: