By Jon Titley in Music Reviews on 14 November 2012

The second album from Leeds-based indie kidsScamsis a collection of non-offensive alternative tunes abundant in angular guitar stabs, sullen basslines, and surprisingly pleasant three-part harmony canons.If you've listened to an album filed under indie/alternative anytime in the past ten years 'Add & Subtract' will offer you nothing you haven't heard before, but if you like the genre, you'll like this album. 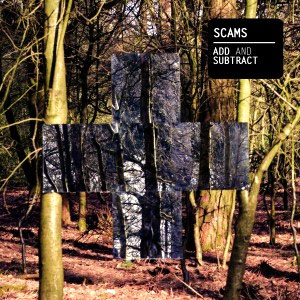 Opener 'Be A Gentlemen' has a brilliantly dirty guitar riff facing off with a single note harmony part that was clearly educated at the Interpol School of Guitar Harmony Parts. Enter the rhythm section and a moody bassline that grooves its way all over the backbeat. It's an angsty but catchy verse and had this song delivered a killer chorus it would've been one of the best songs of the year, but sadly the chorus we have is an underwhelming let down of seemingly random "Oh-Oh-Oh's."

Track two, 'Colouring,' is a rather messy post-punk song that if you played loud in the house your girlfriend/wife/mother would ask you to turn down because she has a headache. As the album progresses there is no groundbreaking musical style to uncover. Recent single 'Pyramids' is an ode to early Bloc Party, whilst 'Lucky Day' has a certain Arctic chill about it, and track five, 'Lifeboats,' might just get Vampire Weekend on the phone to their lawyer. However, there are some great melodic hooks to be found, in particular on the ballad 'It's War.' A simple yet beautiful descending piano line waterfalls through the song, leading us in and out of the best chorus on the record.

Lifeboats Video from Scams Leeds band Scams yesterday released the second single 'Lifeboats' (September 10th 2012) from their new album through Devil Duck Records. The single is unleashed ahead of their second album 'Add and Subtract' which will be available from October 8th 2012. They have also released a lovable music video for 'Lifeboats' which features a group of four beautiful female friends dressed in slightly nautical outfits who vacate to the seaside to enjoy the sand and sea and end up jumping into the harbour from a pier. It's a heart-warming image of friendship and escapism just like the song lyrics describe. The track is an upbeat, catchy indie tune with well-harmonised vocals, melodic keyboard instrumental and gentle drum beats that keep it positive in spite of all the infused emotion. 'Add and Subtract' was produced in Hamburg by Johann Scheerer and then mixed in California by Matt Wignall. The band (vocalist Andy Morgan, bassist Josh Hart, guitarist Jamie Macneal and Chris Burgess on drums) have been impressing live audiences across Europe and the US with supports from artists such as Frankie & The Heartstrings, Cast and Azure Ray. The have supported The Enemy, The Noisettes and The Overtones when they played the main stage at Hyde Park last month. Also the Lifeboats single has just been made available as a free download via their Scams Facebook page.
1
Scams