Sarah Silverman produced a liquid vaporiser on the red carpet at the Emmy Awards before revealing it was filled with ''liquid pot''. 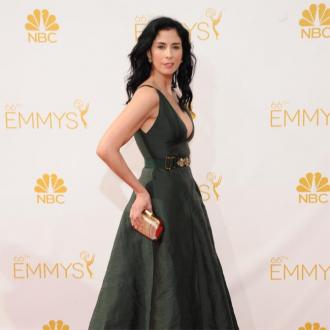 The 43-year-old comedienne brought along the substance, commonly known as THC, to the Nokia Theatre in Los Angeles for the ceremony yesterday (25.08.14) and seemed quite happy to divulge the contents of her handbag to E!'s Giuliana Rancic on the red carpet.

In a segment of the channel's Emmys coverage called 'Clutch Cam', Giuliana asked Sarah to show the viewers what was in her purse and she produced a liquid vaporiser before declaring: ''This is my pot. It's liquid pot.''

Sarah - who previously admitted in November 2013 that she smokes ''a lot of pot'' - later picked up the accolade for Outstanding Writing For a Variety Special for her HBO show 'We Are Miracles', and she sprinted onto the stage to collect her prize barefoot.

The brunette star did away with her shoes as soon as her name was called out as the winner of accolade and hitched up her green Marni dress before running down the aisle.

During her acceptance speech, Sarah paid tribute to Largo - where her comedy show is based - for introducing her to her boyfriend Michael Sheen.

She said: ''Mark Flanagan at Largo. Thank you for making Largo my home, and for introducing me to my love, Mr. Fancypants Sheen.''

Sarah then concluded her speech in bizarre fashion, explaining: ''And we are just molecules and hurling through space right now.''

The star's barefoot antics appeared to appeal to 29-year-old stunner Anna Kendrick, who joked Sarah was ''HAF'', which stands for ''high as f**k.''

She tweeted: ''Silverman is Barefoot and #HAF Live your life girl! (sic)''

THC is currently legal in California so Sarah was not breaking any laws, but there's a new bill in place which would prohibit the substance if it is passed.